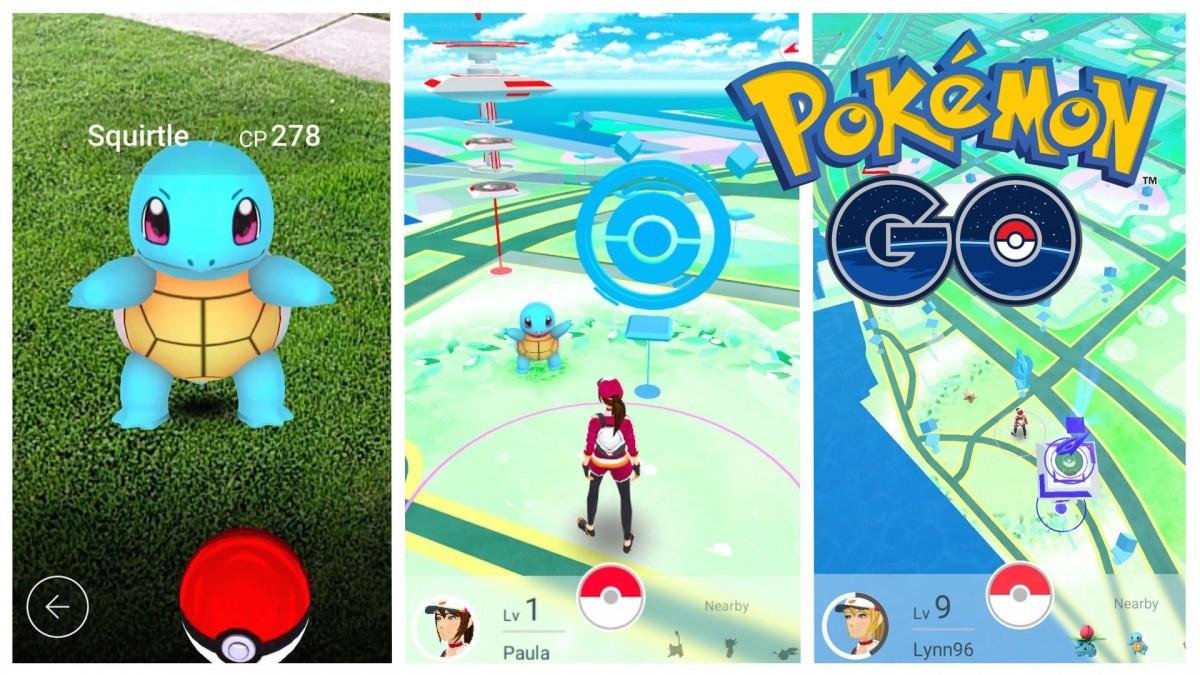 Confession: it’s been just over a month now since I installed and starting playing the Pokémon Go smartphone app/game. It’s been an interesting time—with lots of light hearted moments shared with my kids as we’ve high-fived a good catch, and shared the loss of a Pokémon which has escaped my Pokéball and escaped in a puff of cloud.

Over the month that I have been playing I’ve also noticed that the game has had a fairly polarising effect on people. It seems you either love it or hate it! I can understand those who love it—it’s a fun game, it’s a novel take on social interaction and engagement, it’s helped me get outside and walking (!), and I’ve heard many couples enjoying time out together on ’Poké-dates’.

Starting from the most serious concerns, I have read a few websites and blog posts which have made the claim that the game promotes animism (a belief personal spiritual beings and impersonal spiritual forces have power over human affairs, and consequently, that human beings must discover what beings and forces are influencing them in order to determine future action and, frequently, to manipulate their power).  While there are shades of truth about this, I consider these arguments to be over-reach and over-reaction.

The very light shade of truth is that Pokémon Go, like the Pokémon games before it, does involve capturing mythical beasts and using/controlling them as their trainer to battle other Pokémon (and their trainers) on your behalf. And that’s about where the similarities between animism and Pokémon Go end.

Concerns that the game promotes Animism in some subtle form of spiritual deception is massive overreach: accusing the game of doing something that it very clearly is not.

First, there is no storyline or narrative within the game that promotes animistic concepts. There is no commentary or subtle hints in this direction either. While the game itself does use elements of manipulating these beings known as ‘Pocket-monsters’ there is nothing within the game which makes any spiritual connection to the users’ activity.

The other day my wife sent me video of our 4 year old son playing with Iron Man and Captain America action figures. Even without seeing the movie, he picked up the two toys and ‘battled’ them together (and of course one lost… but why did it have to be Cap?! #TeamCap). I think there is little intrinsic difference between Pokémon Go users battling their Pokémon in a gym and what my son did with those two toy figurines. At the end of the day both Pokémon Go user and my son walk away having ‘played’, and little else.

Second, to say that the game is influencing the minds of young adults towards accepting animism is to give undue influence to the medium. Put simply: it’s a game. Most normal people can discern the difference between what takes place within a fictional world/universe of a game and real life.

There’s a great story from Star Wars actor Ewan McGregor (who plays a young Obi-Wan Kenobi in the Stars Wars prequels) who tells how cute it is when kids come up to him and ask how they can join the Jedi Academy. But McGregor says he gets really annoyed when adults come up to him and ask the same thing – because he knows, and we know, that it’s silly that an adult would think that something like the Force and the Jedi Academy from Star Wars exists in real life.

Third, Pokémon Go is not pitched at young children. In fact, it’s near impossible for young children to play it. You need a mobile device, and the game requires you to be out and about, walking around trying to find wild Pokémon. Parents are not going to be walking around constantly with their kids every time they want to play it. Ain’t no(parent) got time for that!

Rather, the vast majority of Pokémon Go users are young adults. Young adults who should know enough to discern between the fictional game world and real life.

Another major concern is that the game teaches and promotes ‘evolution’.

Does it? In a nutshell: no. Yes, part of the game involves ‘evolving’ Pokémon to a higher and more powerful form but there are critical differences between this in-game evolution and the Darwinian Evolution that many Christians are often so fearful of.

First, the type of evolution that occurs within the game involves mystical/magical transformations: the Pokémon rises into the air in a brilliant ball of light and then *poof*, out comes the new evolved Pokémon. Check out the video below for what it looks like in game.

I hope from that video that it’s obvious this can hardly be seen as promoting Darwinian Evolution.

Second, the irony of evolution in Pokémon Go is that is requires an intelligent being (the user) to make a ‘sovereign’ and free choice over the type and timing of the evolution, and then to push the ‘evolution’ button. Darwinian Evolution by definition rejects the involvement of any intelligent being controlling the process of evolution.

But seriously, young adults (ie. teenagers) are more likely to be influenced by Darwinian Evolution by doing their studies in High School Science than they are going to be playing Pokémon Go. I make no comment on whether studying evolution in school is a good or bad thing – I’m just saying that fears that Pokémon Go promotes evolution are woefully overstated.

When I got sent articles and posts about the so-called dangers of Pokémon Go promoting animism and evolution I was annoyed. It annoyed me that the writers didn’t engage with the game itself to test whether their fears and concerns were genuine. But it annoyed me the most that these overstated fears cloud out real and genuine concerns regarding the game.

In 1 Corinthians 10:23 Paul quotes what may have been a common Corinthian catchphrase ‘All things are lawful’. It seems that some in the church were using the catch phrase based on their inadequate understanding of the gospel – “Jesus has set us free from condemnation, so all things are now lawful for us to do!” That’s my guess.

So Paul writes back that this catch phrase is only partially correct – “All things are lawful, sure, BUT not all things are helpful.”

There are some things in life which are neutral at best. Neither good nor bad. Some are free to participate in these things – but for some it might not be so good to do so.

In relation to Pokémon Go I think there are three ways in which it can be unhelpful.

I’m cautious about using the word ‘addicted’ to describe how some play the game so often. Addiction is medical term with a distinct medical definition, and every time we use the word wrongly we cheapen the effects of real addiction.

Lack of self-control is, I think, a better way of looking at this issue. Those who play it constantly, talk about it constantly, and are often disengaged and staring at their phones. One parent shared this concern with me that he would not let his two daughters play the game because they have a habit of lack of self-control when it comes to these things in general – a constant preoccupation with these sorts of games: hours on end, day after day. I get that, that’s a real and genuine concern that I see not only in others but also in myself.

The gospel trains us to renounce ungodliness and worldly passions, and to live self-controlled, upright and godly lives in the present age (Titus 2:12). A preoccupation with this game, which I think is a common danger of it, is not helpful.

One of the main features of the game which compels users on (since it lacks any narrative to compel users on) is the idea of levelling up in order to catch more distinct and rarer Pokémon. Levelling up in order to be ‘the very best, like no one ever was’ because  you ‘gotta catch ‘em all’ is a key mark of the Pokémon experience.

But when we begin wrapping our identity and status around what level we are, what our highest combat power Pokémon is, how many Gyms we own or have taken, then we verge into the danger area of idolatry.

In Mark Driscoll and Gerry Breshear’s book ‘Vintage Jesus’ they provide a list of questions to help identify our idols (also known as our functional saviours):

In answering these questions you can see how our rank on Pokémon Go could act as an idol in our lives.

I honestly think this is probably the biggest danger that Pokémon Go users face. Not because I think ‘there are better things to be doing with your time’ – there are heaps of other time consuming, and more expensive, hobbies that get less criticism than Pokémon Go has in the past month.

No, the biggest concern I have for any Christian playing Pokémon Go is that we’ll have good reasons for playing it, but end up distracted by the game itself. Using this game to connect with non-Christian friends and go out on outings is great; spending all your time with your friends glued to your phone, not great.  Using this game as a connection point for conversations, perfectly fine; spending all your time talking about this, not fine.

Matt Chandler explains this problem the best in this short 2.5 min clip:

The biggest potential danger with Pokémon Go is that it gives us a big enough distraction from our boredom that we will miss that we have been called to bigger and greater things in the gospel.

I think Pokémon Go is a pretty fun game. It’s got me out and about walking with the kids – which has been good for my health. It’s been a point of connection in my youth ministry as I use it to start conversations with teens before moving onto what else is happening in their lives. I know couples who have been able to enjoy time out together on Poke-dates.

Does Pokémon Go teach and promote animism and evolution? Hardly. Can Pokémon Go potentially stumble us into a lack of self-control, idolatry, and distraction from eternal matters? Potentially.

Basically there are helpful and unhelpful ways of enjoying this game.

I was forwarded a document from an Asian church which basically decried the game as demonic. To be honest I found it ironic: I find the preoccupation with academic excellence in our Asian circles to be much more demonic, and potentially eternally damning, than a phone game. I’ve seen more youth fall away pursuing academic excellence than I have seen youth fall away because of computer games.