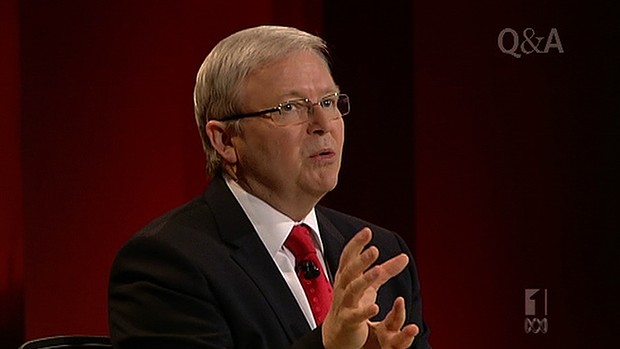 Here’s the video making the rounds.

I’m not going to get into the homosexuality debate for now, but I do want to address the fundamental misconception that Rudd has put forth: that slavery in the Bible is the same as slavery in pre-Civil War America.

To be brief, let me list in point form what slavery in the Bible was like (with references at the end) and I’ll leave it to you to decide if Rudd’s use of it was a fair argument:

And here is a quote from one of my first year Bible college essays on the issue of slavery in Paul’s writings:

Firstly it must be stated that Paul was not silent on the issue of slavery.  Paul spoke about the issue frequently. (eg. Romans 6, 1 Corinthians 7:7-24 and Chapter 12, 2 Corinthians 11, Galatians 3:28, 4:1, Ephesians 6, Colossians 3, 1 Timothy 1 and 6, Titus 2, and most notably Philemon.) The debate centres around what Paul meant in his letters and how his readers would have understood his message.

It would be remiss of an essay of this sort not to discuss Paul’s letter to Philemon*.  There is little room to take an in-depth look at the letter but there are a few things worth noting.  Whilst Paul did not explicitly call for the manumission of Onesimus, Paul’s letter does clearly call on Philemon to welcome Onesimus back.  The basis for welcoming him back would be based not simply upon compassion for the lowly slave but on ‘brotherly love’.  Paul truly believed that before God there were no levels of status, no upper or lower classes (cf Galatians 3:28).  Paul was so convinced that Christ could bring believers together and that brotherly love shown to a free person should be expressed to a slave also.  Slave status was elevated to parity status with their masters in the ‘Divine economy’.

Paul seems to take his greatest stand on two particular issues.  The first being the exploitation of slaves for monetary gain.  The abuse of slaves was denounced.  By clear implication from passages such as Colossians 4:1 and Ephesians 6:9 slave owners are directed to treat their slaves justly and fairly and to refrain from abuse.  The second issue Paul stood against was the involvement of people in kidnapping persons for slavery and trafficking (cf 1 Timothy 9:11 where Paul denounces a list of ‘sinners’ including ‘man-stealers’ or ‘enslavers’ according to the ESV)

That Paul accepts slavery as a pre-existing social condition is not in dispute.  But in contrast to the Roman and Greek views Paul’s views undermine the prevalent attitudes towards slaves.  Romans viewed slaves as chattels, mere mortal objects to be used primarily for self-gain.  In contrast Paul commanded that slaves, and slave owners, who were Christians, to love each other as brothers – as family.  The contrast between Paul’s views and Jewish views on that same point is also apparent – even though Jews were more humane in their slavery practices the relationship between master and slave was, at best, a relationship of employer and employee.  The concept that a Christian slave must be viewed as a family member would have been a repugnant concept in 1st century Rome.

Paul’s elevation of a slave’s personhood is the most striking cultural challenge of his day.  In a period which slaves were never included as addressees, because they were regarded as either non-persons or as persons without the social responsibilities of the free, Paul set about reshaping this dynamic.  Whilst falling short of denouncing the institution outright, Paul pushed the envelope as far as he most likely could without drawing unwarranted attention from authorities.  His commands so transformed the relationship of master/slave that today’s equivalent of employer/employee still pales in contrast to what Paul intended – that status would be nullified and each would see the other as family.

That’s a pretty brief summary on a big topic. To my mind Kevin Rudd’s comparison between slavery in the Bible and slavery in pre-Civil War America is not just comparing apples with oranges, but apples with rotten oranges.

*Philemon is the title given to a personal letter written by Paul to Philemon, a wealthy slave-holding Christian who lived and served in Colossae.  At some point one of Philemon’s slaves, Onesimus, fled to Rome, possibly with some money or property belonging to Philemon.  Onesimus providentially met Paul, converted, and over a short period spent much time and energy helping a severely restrained Paul.  As much as Paul would have wanted to keep Onesimus in his service he realised that the severed relationship and wrongdoing between Onesimus and his master needed to be addressed.  Paul wrote this personal letter pleading for reconciliation between the two – and for Philemon to accept Onesimus back, not just as a runaway slave but as a beloved brother.

Bauckham, Richard. The Bible in Politics: How to Read the Bible Politically. Louisville: Westminster John Knox, 1989

Sandy Grant at Matthias Media puts the case well on how Scripture views the issue of slavery. I quote his concluding thoughts which I didn’t cover but intended!

Your ethnicity and gender, your social, educational and economic status or class, are far less important than the fact that all humans are created in the image of God. And here, far less important to a Christian, than that you are all united, equally, in Christ.

But the New Testament goes further. Paul encourages the emancipation of a runaway slave, Onesimus, in his letter to the wronged-master, Philemon. And in addition, Paul writes these words in 1 Corinthians 7:21-22:

Slavery is never once taught in Scripture as the natural condition. Rather, if you can gain your freedom, do so.

The trajectory of scripture is towards a slave-less society rather than the status quo. In the same way that our laws today concerning cigarette smoking aim at a smoke-less society without banning it altogether.