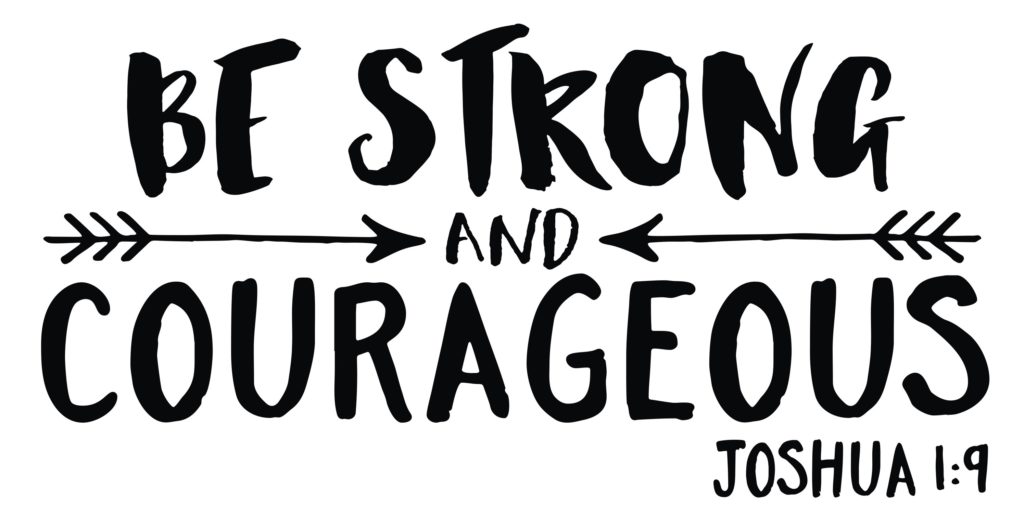 Last Sunday we began our series in Joshua. Towards the end I said that the phrase ‘be strong and courageous’ wasn’t something necessarily applicable to Christians today for two reasons:

To make the point that this phrase was particular to Joshua I showed how God’s command in giving it was set within the historical context of Joshua for the moment.

I realised now that point 1 is actually incorrect.

The phrase is used a number of other times in the Old Testament – however each time it is used, it still appears only applicable within its primary historical context. For instance:

It is used three of times in Deuteronomy (31:6-7, 23) – but this is particular to Joshua again. The repetition of those words in Joshua 1, I think, further fuels the idea that Joshua is feeling weak and afraid!

Joshua himself uses the phrase to encourage the men of Israel in 10:25 – right before striking down the 5 kings of Canaan. In context, this phrase is again particular to the context of the conquest of Canaan by Israel.

David also uses the phrase with his son Solomon in 1 Chronicles 22:13, 28:20 – both times in relation to Solomon’s task of building the Temple.

The final usage of the phrase comes in 2 Chronicles 32:7 when good king Hezekiah uses the phrase to bolster the courage of his men as they faced the armies of Assyria. The usage of this phrase within this battle context makes sense of how it is used with Joshua.

In the New Testament, there is no ‘be strong and courageous’ imperative – but there are moments of courage and strength to be had.

However, to be strong is usually within the context of being weak! For instance:

In 2 Corinthians 12:10, Paul powerfully makes his argument that it is through his weakness that God displays his strength and power. So, Paul declares, ‘when I am weak, then I am strong.’

In Hebrews 11:34 the use of the word ‘strong’ is also within the context of weakness.

In 1 Corinthians 16:13, we have an imperative to be strong that comes closest to a somewhat militarist mode – but even then it is used metaphorically of standing firm in the faith. This show of strength differs from the battle context in which Joshua is told to be strong.

Courage is used less frequently than strong in the New Testament, and the three particular uses by Paul (2 Corinthians 5:6, 8; Philippians 1:20) appear to be within the context of gospel-driven hope to power him on in ministry.

Or to use the analogy from Sunday – Jesus has taken the ball, run over the opposition, and we follow in his footsteps enjoying his victory, cheering his works, and giving thanks that we are now on his team.