More serious theological blogging to come soon. In the meantime and in the spirit of ‘doing all things to the glory of God’ here’s a post that I had immense fun doing the research for and writing up.

According to Wikipedia ‘Sarsaparilla is a soft drink, originally made from the Smilax regelii plant, but now sometimes made with artificial flavours.’ Like Coca Cola it was originally marketed as a remedy for skin and blood problems as well as a preventative for venereal disease, was often the butt of jokes in Westerns where ordering sarsaparilla instead of whiskey was mocked, and has since died out as a drink in the US though remains popular in some Asian countries and Australia.

I pity those countries who are missing out.

So here’s a review of seven sarsaparilla brands I was able to find in my local vicinity. Some are easily available from supermarkets (such as Bundaberg or Schweppes) and others a little more trickier to find.

The tastings will attempt to feature notes on the aromas (the nose) and the taste (the palate). A personal score out of 5 is given, make of that what you will. Sugar content will also be noted.

So in no particular order, let the tasting begin! 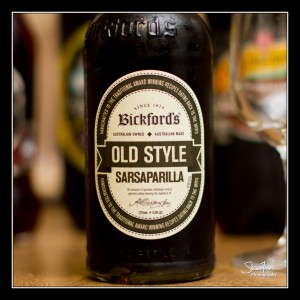 On the palate: mid to light carbonation, a pleasant lingering finish, not too sweet with a good mouth feel, hints of liquorice and aniseed spice

This is a really smooth Sarsaparilla. Pleasant from the opening, the freshness of the nose, the mid-level carbonation and mouth feel, to the lingering and gently sweet liquorice finish, with hints of star anise spice.

There are however two negatives. The first is that the bottle is 275ml – barely over a cup! This then is a good Sarsaparilla for enjoying the taste while watching your waist.

The second is that Bickford’s can be hard to find. The only place I have seen it is in my local Caltex Woolworths petrol station…

Last bit: The bottle has an interesting little kink on the bottom – kinda like IKEA mugs with the kink which allows water to drain off quickly when in the dishwasher. So are Bickfords recycling bottles…?! 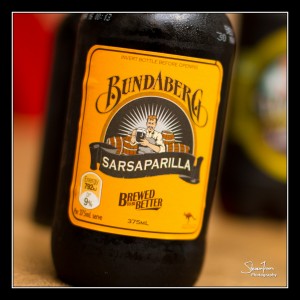 Gorgeous from start to finish

On the nose: sweet liquorice and vanilla pleasantly dominate

On the palate: very light carbonation, I think the lightest of this test batch, hence the mouth feel is delicate.  A gentle sweetness is provided by the molasses, with hints of that original sarsaparilla flavour mixed with a little bit of grass/herbal jelly.

When most people think of Sarsaparilla around these parts (ie Brisbane) we tend to think of ‘that other Bundaberg drink which is not rum’. Bundaberg brewery is obviously famous for its ginger beer, but following closely behind that would be its sarsaparilla. (UPDATE: I’ve been informed that the Rum distillery and Ginger Beer Brewery are unrelated).

Boasting a three day brew this is a very nice drop. Opening the pull tab is a ceremonial rite of passage, and learning how to get it open quickly and properly is a skill to boast of in of itself (if boasting in such things is your thing). The gentle sound of trapped gas escaping in the initial ‘phsshh’ is an aural delight. The nose and palate are greeted with the same flavours (sweet liquorice and vanilla) and the light carbonation makes this very easy to drink.

The one negative is that this is really a sit down to drink all at once type of beverage because the fitted ring pull tab lid does not make for an easy travelling and sipping companion. Still, if you want to know what a proper and classic Sarsaparilla should taste like you can’t go much further. 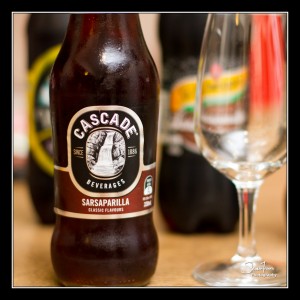 On the nose: strong liquorice… only liquorice

Not to be confused with one of Tasmania’s finest breweries, though related, Cascade Beverages offers a range of non-alcoholic drinks. I’ve enjoyed their mixer drinks before, such as Lemon-Lime-Bitters. But their sarsaparilla offering is only ok. If you’re a liquorice fan you’ll love this drink. The strong aniseed aroma is backed up by a liquorice palate (and a liquorice infused burp). Sweetness is well balanced, but the rest of the drink is not as complex as other Sarsaparillas on this list. It’s also one of the more expensive drinks on this list. 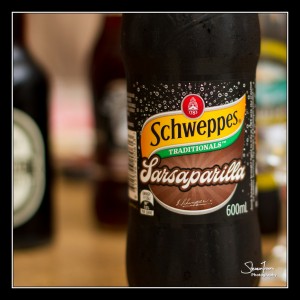 On the nose: liquorice, sweet cola

On the palate: generic sweetness, some cola flavour, very subtle liquorice, hints of caramel and vanilla

Schweppes has a long history of gracing our supermarket shelves, since 1783 as boasted on its logo. Most of us probably know it is the brand we often don’t buy because it’s so expensive! But we do love their ‘Agrum’ and ‘Blood Orange’ drinks.

Their Sarsaparilla, however, ain’t that great. I’m not sure this drink knows what it wants to be. Is it a sarsaparilla or generic cola? This isn’t to say it’s unpleasant, but it is to say that there are better drinks on this list. 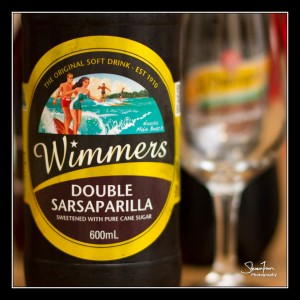 On the palate: that taste of cane sugar comes through loud and clear – that fibrous note from chewing on sugar cane dances on my tongue, hints of vanilla and liquorice and that traditional sarsaparilla flavour. The taste lingers… in an unpleasant way.

To say I’m disappointed is an understatement. I’ve purposefully left this one till later because I’ve always enjoyed Wimmers Double Sarsaparilla. It was my go to Sars when the options were there. Now having drunk my way through these last few I can see that there are some remarkable differences in palate and olfactory feel.

This is a wildly unbalanced drink. The nose is simply too strong and unpleasant. The palate is all over the place: sugar, hints of bitterness, a touch of vanilla, and all without finding any enjoyable equilibrium. I imagine this is what it would be like to actually munch on the Smilax regelii plant this stuff is made out of.

I’m hoping this was a dud batch, and that perhaps the supermarket I purchased it from didn’t store it correctly.

Update: Nope. I went back and bought another bottle and it was the same all over again. *sigh* 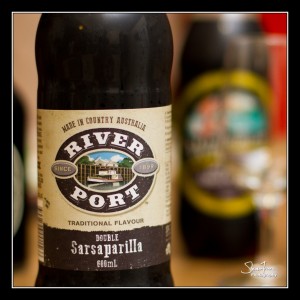 ‘Made in country Australia’

On the nose: strong earthy liquorice mixed with the menthol of tiger balm!

In my hunt for sarsaparilla bottles I stumbled upon this one at my local fish and chip shop – and I have never seen it anywhere else.

Given that sarsaparilla started out as a medicinal drink it seems that River Port Double Sars gives us probably the closest representation of that. From the medicinal quality of the smells that greet you upon opening up the bottle to the bold sarsaparilla flavour this is drink that makes you feel healthier with every sip. And I don’t mean that in a starve-yourself-diet kinda way.

This drink is a surprise to say the least. A surprising find and a pleasantly surprising taste, though I might add this might be a more acquired sarsaparilla flavour.

‘Taste it to believe it!’

On the nose: subtle yet deep liquorice, hints of vanilla

On the palate: decent carbonation, velvety mouth feel, gentle sweetness mixed with vanilla and a deep yet not overpowering liquorice. This is very nice.

I’ve tasted and I believe!

Alrighty, so there you go. 7 bottles of my favourite soft drink Sarsaparilla tested. I’ll probably keep going back to Bickfords when I can find it (for the benefit of my waist) and Bundaberg above other options.

So what soft drink should I trial next? Ginger Beer? Creaming Soda? Put your preference in the comments below. 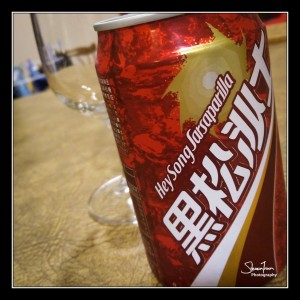 On the palate: Mid to high levels of carbonation, very subtle star anise, some vanilla, some generic cola sweetness, well balanced but tastes watered down.

Stop the presses! I’ve found me an Asian Sarsaparilla at my local Asian grocer. HeySong Sarsaparilla, which I tried recently at a social gathering, and now for a proper tasting. The first thing you notice is how light the drink looks in comparison to the very dark and earthy colours of all the previous drinks. I thought the Cascade Sarsaparilla was light. This looks like someone watered that down even further.

The nose is greeted with an interesting mix of generic cola, hints of musk and subtle Asian medicinal herbs. That smell you get when walking into one of those Asian medicinal stores – imagine bottling that (or in this case canning it).

On the palate there is an immediate greeting by the carbonation – possibly the highest of this test batch and a definite reminder that this is a soft drink. The carbonation dominates, making it very hard to taste anything. Subtle star anise flavours mixed with vanilla float to the front of my olfactory senses which is quickly chased down by watered down cola. Think that glass of cola and ice that’s been sitting there for a little too long and you’ll know what I mean.